May 2008 marked the beginning of a concerted effort by private nursery growers in western Canada to explore the viability of the many new and unused varieties of shade trees that had been developed in recent years.  At four nurseries across the Prairie Provinces (Jeffries Nurseries in Portage la Prairie, Manitoba., Lakeshore tree Farms in Saskatoon, Saskatchewan., Eagle Lake Nurseries in Strathmore, Alberta., and Old Man Creek Nursery in Edmonton, Alberta.), test plots containing the first of 150 chosen varieties were planted, and the Prairie T.R.U.S.T (Trial of Rural and Urban Shade Trees) project was underway. 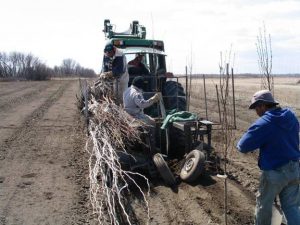 The trial’s implementation came very quickly, as the idea for it was born at a meeting of the Western Nursery Growers Group (WNGG), only 6 months prior to the first trees being planted.  It was at this meeting of nursery growers from Manitoba, Saskatchewan, Alberta, and British Columbia, that members reported what their customers were expressing; that being a need to diversify the current palette of viable trees for the coldest zones of Western Canada.

The WNGG decided at that meeting in November, 2007, that there were enough new varieties with anecdotal evidence as to their possible viability to conduct a multi-regional trial.  It was decided that we needed to do it now.  And it was decided that the best way to do it right and to do it quickly was to do it ourselves, in-house.  Growers at the table threw up their hands to volunteer space, and liner suppliers spoke up to supply the plants.  All that was left was money and a plan, but it was enough to get started.  We all went back to our rooms after that meeting knowing we had started something important.

As it stands now, the Prairie Provinces, straddling a wide belt of climate zones 1, 2, and 3,  have few options for street trees and shelterbelts.  Our two most viable species, Elm and Ash, are under threat from foreign pests.  While the spread of Dutch Elm Disease has slowed to a crawl due to hyper vigilance and urban pruning programs, Emerald Ash Borer so far seems unstoppable.  While the threat is still far away from our region, it has made us look up into the canopy of our communities and realize that our urban forest is at risk. 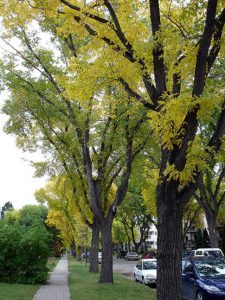 It is sometimes hard to illustrate to our neighbours to East, Far-West and South how hard it is to come up with good trees in our region where minimum temperatures can reach -40 to -45 degrees Celsius in some areas on the odd January night.  Complicating the climate zone as well is the warm Chinook winds prevalent in the southwest part of the region, where temperatures can rise and fall 30 degrees in a 24 hour period during a severe Chinook event.   Even in areas just a little warmer, say zone 4 and 5, the variety of viable trees suddenly doubles.  Residents of Montreal, Toronto, Chilly Minnesota, and even Thunder Bay, enjoy the options of Red Maple, Sugar Maple, Norway Maple, Red Oak, White Oak, Lindens and Basswoods, Beech, and many more.  Here in the continental steppe, all we could work with historically was what was native, and what we could bring from Siberia and Manchuria.  Breeders have done much in the past 100 years to add to our options, but in the end, here we are, still planting Elm and Ash, and wishing the Lindens we planted would hurry up and grow in our heavy soils. 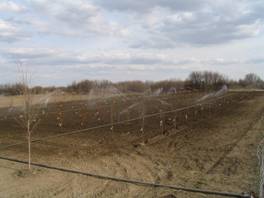 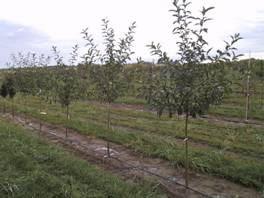 The Prairie T.R.U.S.T. project is planted at select nurseries that are members of the Western Nursery Growers Group.  This trial counts on participating nurseries to use their own “normal” practices for growing the trees.  Note the overhead irrigation and cultivated soil at Lakeshore Tree Farms and the drip irrigation and between-row turf at Eagle Lake Nurseries.

The Prairie T.R.U.S.T. project, while not completely dismissing new Ash clones, concentrates on Maple (Acer spp.) and Lindens (Tilia spp.) as the genera with the most contributing selections. The WNGG felt that it was in Maples and Lindens where much of our hope for new trees would lay, given our communities’ need for tall, broad canopies.  It was also within these two genera that much work has beendone in Manitoba and Minnesota to extend the ranges of these trees.  Elm (Ulmus spp.) varieties with claims of being D.E.D. resistant have been planted at the Manitoba site, and work is being done to lower the risk of bringing these new selections into the D.E.D. free zones of Saskatchewan and Alberta. There are many Ornamental Crabapple (Malus spp.) clones included as well, and a good number of smaller flowering trees.

A complete list of tree varieties selected for the Prairie T.R.U.S.T. project can be seen here. 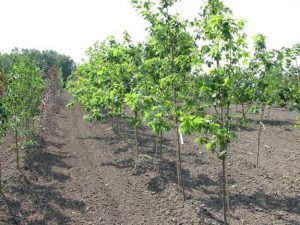 While we have hopes that some selections will prove to be very useful for our communities, we also know that our test plots will have many dead or damaged trees in them over the next few years.  We welcome that too, as we feel it is just as useful to “put the final nail in the coffin” for some of the more tender selections that have been promoted in our area.  This will prevent nurseries and municipalities from repeating failures, as they will have solid data to help them decide what to try and what to forget. 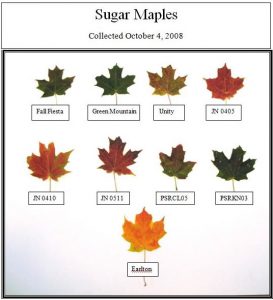 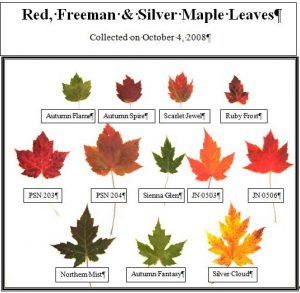 We have our work cut out for us.  The current phase of the trial (Phase 1)  will include continuing to plant selections as they become available over the next 3 years as well as measuring and recording growth parameters on an annual basis.  Annual evaluation will continue for another 5 years (Phase 2). The measuring and evaluation of the trees will be carried out by Rick Durand, a long-time prairie tree researcher. This phase should wrap up and have final recommendations within 8 years.  Finally, the WNGG plans to publish the results in a reader-friendly format and supply the results of the project to nursery growers, municipalities, landowners, and landscape architects throughout the prairie region. 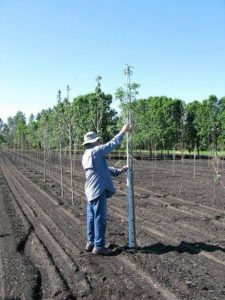 It is exciting to work together toward such a broadly beneficial goal.  Special thanks goes to our gold sponsors Manitoba Rural Adaptation Council Inc. (MRAC), Agriculture Council of Saskatchewan Inc. and Alberta Agriculture and Food Council for providing half of the required $170,000.00 for Phase 1, and our major suppliers of donated trees; Advance Nursery Co., Aubin Nurseries, Bailey Nurseries, Bylands Nurseries, Jeffries Nurseries and Lakeshore Tree Farms.